Join our subscribers list to get the latest news, updates and special offers directly in your inbox

Inheritance is the methodology by which a class inherits the properties and functionalities of another class. So, if class A is inherited from class B, then class A automatically receives the capabilities of class B. This is also an example of code reuse - class B code is reused in class A.

In real life, a class may be a descendant of another class. For example, the Student class is inherited from the Person class. A student is a person, but all persons are not students. A person is a superclass, and a Student is a subclass.

The basic idea behind inheritance stems from two important concepts - code reuse and object hierarchy. If class A holds all the properties of class B and it has some more properties of its own, then we may think of reusing class B when constructing class A.

This means class A inherits all members of class B by default and is also allowed to add more as per the need of the class. This forms a class hierarchy. Inheritance is a use case of code reuse.

We have discussed the following new concepts related to inheritance.

Inheritance and encapsulation work together. We have seen that a subclass inherits all the attributes of its superclass. Therefore, all the members that have been encapsulated in the parent remain encapsulated even in the child class, and this way, the encapsulation is carried on. This helps in handling the complexity of programs that grow in size.Types of Inheritance

1. Single Inheritance – A Child or Derived class inherits its Parent or Base class. This may be represented as Parent -> Child. The following example shows the inheritance of a Child from a Parent and the accessibility of the base class member variable and method from the derived class. Parent class members are also accessible from a Parent object. 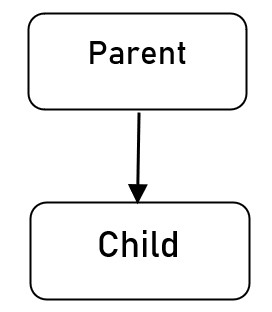 2. Multilevel Inheritance - In Multilevel Inheritance, a derived class may also act as a base class for another class derived from it. Here the representation is Parent -> Child -> Grandchild. What is the max level of inheritance in Java? A natural query. The answer is there are no specifications in the language, but it may be implementation dependant. 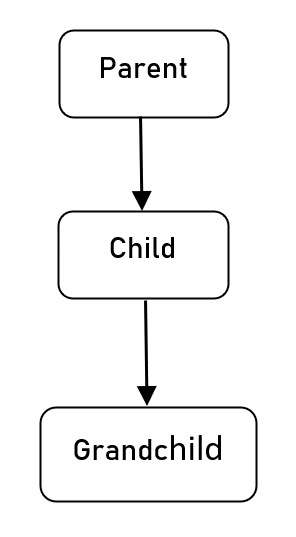 Let us take the following hypothetical example to explain this. The application under consideration is Credit Card of a specific bank. The study reveals that the bank offers three types of credit cards – regular, gold and premium.

Each type of card has some common properties like card number, name of the cardholder, customer phone number, customer address, customer email id, date of issue, date of expiry, CVV, and credit limit.

The actions of the card include – spendMoney, depositMoney, generateStatement, addCustomer, deleteCustomer, activateCard, deactivateCard etc. These are the standard set of properties and actions required for all card types and can be considered at Credit Card level. But each type of card has some specifics, which are unique differentiators.

When we design a parent class, we must factor out the commonalities of various child classes of that parent.  Once the parent is created, the child classes can be created by extending it further. This adds more elegance and readability to the class design. To illustrate this, The below example shows a very novice implementation of the parent class CreditCard and one child class Regular derived from the parent.

This site uses cookies. By continuing to browse the site you are agreeing to our use of cookies Find out more here